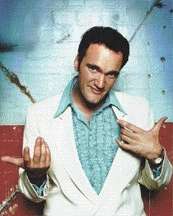 Call it "Kill Gil". Quentin Tarantino has signed to direct the season-finale episode of primetime's most-watched series, CBS' "CSI: Crime Scene Investigation." Tarantino also has come up with an original story for the episode, which is expected to shoot in early April and air May 19, according to "CSI" executive producer Carol Mendelsohn. Tarantino has long been a fan of the stylish forensic drama as series creator/executive producer Anthony Zuiker learned when he bumped into Tarantino at an awards show during "CSI's" first season. They have pursued him to direct an episode for some time, and after members of the "CSI" crew ran into Tarantino a few weeks ago while the show was doing some location shooting in Las Vegas, the stars finally aligned for him to helm the show's fifth-season closer, Mendelsohn said